After the provisional results were announced for January’s T-3 Capacity Market (CM) auction, Head of Markets for Smart Generation, Boz Bozhkov, assesses the winners and losers this time round.

After the reinstatement of the Capacity Market last October, the schedule of the CM auctions had to be tweaked a little in order to allow for the procurement of sufficient capacity in line with normal scheduling. Owing to its previous suspension, a T-4 auction for delivery in 2022/23 had to be delayed until recently, hence what we are now calling the T-3.

The key numbers to take away this time are that 45GW were contracted for at a price of £6.44/kW per year. This represents better value for the end consumer yet again, with last year’s equivalent auction having cleared at £8.40/kW per year, and a steep decline from the £18-22/kW range cleared in past auctions. The flip side of that is of course that new build generation finds it harder to deploy with lower revenues on offer – something which was evidenced by the behaviour of new large gas-fired plants which exited this auction. By avoiding locking themselves into these prices now, it suggests that they expect a recovery in the clearing price in future T-4 auctions, which is in line with the long-term expectations across the industry.

It’s not all bad news for generators however. As coal fired plants come off the system, the mix of technologies used in the CM is getting cleaner and with the introduction of renewables into the auction for the first time, further progress is being made in this area. Onshore wind secured 15MW for the first time. whilst battery storage only procured 30MW. For both technologies, this is due to the severe de-rating factors applied to them which has dampened interest in the CM.

In this vein, an interesting new dynamic has arisen whereby some existing larger plant failed to secure contracts. Chief among these were Hinkley Point B, Drax Units 4 & 5 and 2 out of Ratcliffe’s 4 units. For the latter, there is a possibility that this could represent a form of tactical bidding – maintaining the value for the wider portfolio and avoiding cannibalisation of revenues.

Meanwhile, DSR only procured around half the capacity compared to the previous T-4 auction. This might make for disappointing reading on the face of it, but it’s worth noting the ability of DSR to now accept lower prices. It wasn’t that long ago that the specific Transitional Auction solely for DSR procured around 300MW at a price of £45/kW. 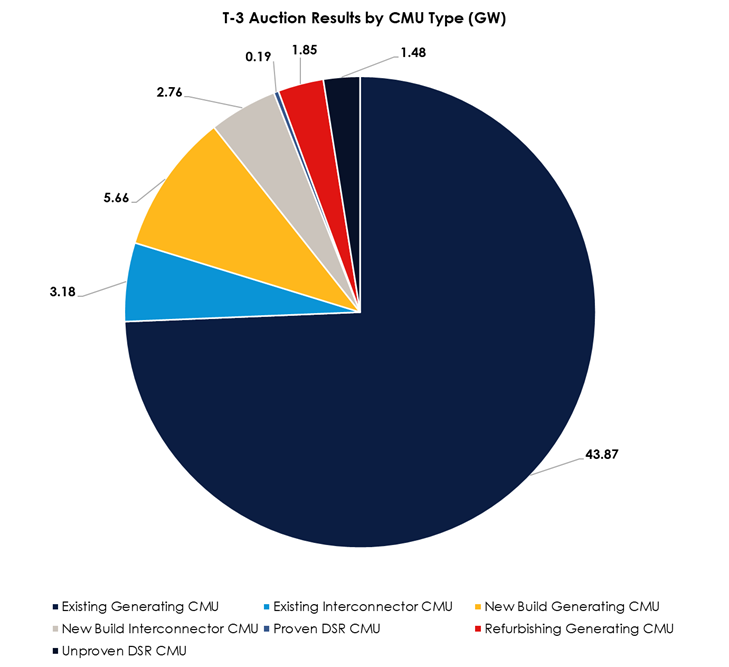 What all of this shows is that existing generation again outperformed new build by far, accounting for 82% of the contracts awarded. The fact that interconnectors (both existing and new build respectively) accounted for the second and third most capacity awarded in the auction (5.9GW total) shows how these low clearing prices are making it harder for new build capacity to deploy.

The prevalence of interconnectors is also a contributing factor to this. Despite being neither generation nor demand themselves, they are able to take low CM prices simply for providing access to other markets. Were they to be excluded from the auctions, it’s possible that the price could recover to more attractive levels as far as new-build Capacity Market Units are concerned.

Looking ahead, in March we have another T-4 auction for delivery in 2023/24. While we expect to see some price recovery, though most of the conditions that led to the low T-3 clearing price are likely to persist and continue to suppress a more significant uplift in this market. It will not be until all coal and older CCGT shut down that we see more attractive values in this scheme. A more ambitious governmental and corporate carbon policies may also provide some much-needed wind beneath the wings of newer, cleaner and smarter energy mix.

Bozhidar is responsible for analysing market opportunities to help asset owners maximise revenues. His role includes the continued development of processes and systems to enable customers to always optimise their positions and he also liaises with National Grid and DNOs to ensure access to all relevant opportunities. Bozhidar joined SmartestEnergy from KiWi Power where he was Head of UK Operations. He holds a Bachelor of Business Administration from Northeastern University, USA and a Master of Science in Economics and Policy of Energy and the Environment from University College London.

> > Connect with Boz on LinkedIn